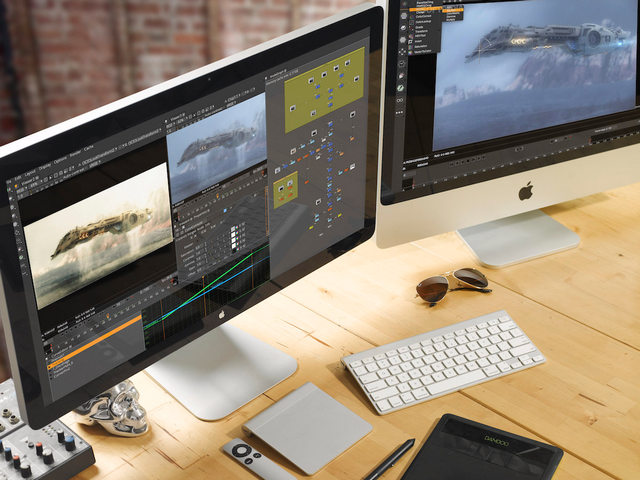 – Python: PyPlugs can now be used to create toolsets, such as Split And Join in the views menu
– New Glow PyPlug
– New bloom node
– The HSVTool node now has an analysis button to set the src color
– The file dialog performances have been greatly improved
– It is now possible to list all available drives in the file dialog on Windows
– New progress panel to manage renders to cancel, queue, pause or restart them
– EXR format reading/writing speed has been greatly improved
– ReadFFMPEG/WriteFFMPEG performances have been improved
– WriteFFMPEG has now a better interface to display possible format/codec combination
– The viewer now has the ability to pause updates so that no render is triggered upon any change that would modify the displayed image
– User interface for parameters has been improved and requires less mouse clicks
– Undo/Redo shortcuts (CTRL-Z or CMD-Z on Mac) now follow the mouse over focus indicated on the interface tabs
– The curve editor has received major speed enhancements when manipulating thousands of keyframes
– The dope sheet zoom is now always appropriate, even for still images
– Fixed issues on Linux/Windows where Natron interface would not display correctly on screens with high DPI
– Fixed issues on Windows where file paths with non ASCII characters would not be read/written correctly
– Fixed issues on Windows where reading from/writing to a network share would not work correctly
– Value parameters can now have Python expressions written directly in their spinbox and can be used as calculators
– A new demo project from Francois Grassard is available at downloads.natron.fr. It contains a fully-featured project demonstrating the use of a complex node-graph including usage of PyPlugs.