Through my eyes : les yeux de… 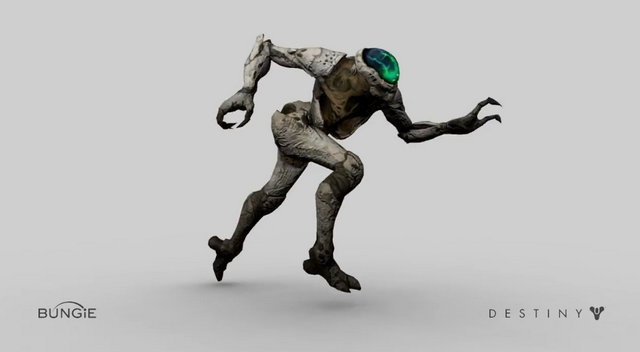 I was the Animation lead for the player, vehicles, and animation technology. I had the pleasure of working closely with our sandbox design, and engineering teams to help make Destiny look and feel as solid as we could make it. Try it out and let me know what you think!

1) Destiny prototype footage – the first two clips were made to help inspire and inform the team at Bungie to what Destiny could look like. This was made back in 2010. The fallen characters are all keyframe (no mocap) performances. The cape on the fallen was keyframe as well (no dynamic sim), because I wanted to control the silhouette. The cape needed to be a part of his performance. The humans are unaltered mocap of me in the spandex. My focus was on defining the fallen here, so that’s where my time went.

2) Destiny gameplay renders – the casual walks each use 5 different navigation samples, 2 of which are heavily edited mocap (walk & run slow). The dance is mocap captured from a professional dance studio, and keyframe edited. The rest of the animation in this section is keyframe work. The sword melee attacks were initially done by Chris Cox, but he unfortunately didn’t have a chance to close them out, so I started fresh and made new ones, which you see here. Check out Chris’s reel for his prototype melee anims.

3) Destiny gameplay montage – I was the player, vehicles, and animation technology lead, which was an honor. We had/have a killer team who all did great work. Here, you can see my direct contribution in-game. I did the majority of the 3rd person player, including the supers, navigation, jumps, etc… I did some work on the 1st person player, including reloads for the sniper rifle and rocket launcher, as well as sprint slides. David Helsby and Matt Kelly were the other player animators, and did an amazing job! Go look them up.

I also helped out combatants with system definition, and the occasional animation, such as the thrall navs, cabal navs, fallen nav polish, etc….

4) Halo Reach – I was the animation lead. I helped define systems, direct the team, and purchased our mocap studio. Here’s a sampling of some of my work. This is all keyframe animation.

5) Body Mechanics Practice – This is all keyframe, no mocap. You can see my reference in the top left of the screen. After Reach, and before we started Destiny, I ran a 1 week-long body mechanics workshop for the team, which I participated in. Here are my results. We kept the mesh super basic so we could focus on only how the body moves.

6) Condemned 1 & 2 – I was the animation lead for monolith making the Condemned games. This is a sampling of my keyframe and mocap work. If it was possible to capture mocap for a clip, we used it, so some of the physically possible clips are heavily edited mocap. Obviously, things like the tarman, bear, baby, & tv smash couldn’t be. It was a pleasure working at Monolith. What a great studio who makes amazing games. The work here is still some of my favorite on my reel.

7) iAnimate.net class demonstrations – on occasion, I teach a class at ianimate.net. It’s not often, but when I do, part of how I teach is by animating in front of the class as they ask questions. The first two clips were made live in class. The girl running was made offline and dissected in class.

8) Commercial work – I had the pleasure of working with a team of guys on the Scion Little Deviants spot. The headless guy is my work. On the goo-scene, the bottom right guy is mine.

The red guy is from ‘Devils and Angles Dating’.

The last clip is Tofu the Vegan Zombie by William Vaughan. I did this keyframe animation for fun to help him market his character.

9) That bucket came from the moon – Bungie was challenged by Warframe to the ALS ice bucket challenge. We turned this around in 1 day. I did the player animation and Pat Jandro did the ghost, as well as a look layer over my player work. The player is made up of 7 or 8 different mocap clips with heavy keyframe work.